Mudra of the Three Jewels

"Homage to you beautifully adorned
By the Three Jewels' gesture at your heart.
Your wheel shines in all directions
With a whirling mass of light."
-  Translated by Thubten Chodron

Hail you whose heart is beautiful
with hands in the Three-Jew'l gesture,
Their exquisite royal wheel-marks
Shining their light-rays everywhere!
-  Translated by Robert Thurman

"Homage, Lady holding her hand over her breast
with a gesture that symbolizes the Three Jewels,
her palms adorned with the universal wheel
radiating a turbulent host of its own beams."
-  Translated by Stephan Beyer

"Home to her whose fingers in the mudra symbol
Of the Three Jewels adorn the heart,
Who by radiating the rays of her own light,
Adorns the wheel of all directions."
-  Translated by Bokar Rinpoche

"Homage! She adorned with fingers,
at Her heart, in Three-Jewel mudra!
Wheel of all quarters adorned,
filled with masses of Her own light!"
-  Translated by Martin Wilson

"Homage, Mother, her hand adorns her heart
In a mudra that symbolizes the Three Jewels.
Adorned with the universal wheel
She radiates turbulent light."
-  Translated by Anna Orlova


The Goddess Arya Tara (Green Tara or White Tara) holds the long stem of a lotus flower.  The lotus flower (Padma) has been used since ancient times as a key symbol in Hinduism and Buddhism and other religions.  The lotus is most often held in the left hand of Arya Tara.  Her left hand is held near her heart.  The huge bloom of the lotus typically appears above her left shoulder.  Tara is often seated on a lotus.  She typically holds the stem of the lotus flower between her left thumb and left ring finger, and the other three fingers are gently held open.  This particular ritual hand position or symbolic hand gesture (mudra) is referred to as the Prithivi Mudra which recharges the root chakra (Muladhara) aligning it with earth energies (Gertrud Hirschi, Mudras, p.84).  "Her left hand is in the gesture of the Three Jewels, with the thumb and ring finger touching and the other three fingers stretched upward.  These three fingers represent the Three Jewels [Buddha, Dharma, Sanga].  They indicate that by entrusting ourselves to these three objects of refuge and practicing their teachings, we can actualize the unity of compassion, bliss, and wisdom, which is symbolized by the joining of her ring finger and thumb." (Ven. Thuben Chodron, How to Free Your Mind, p. 21)  The Hindu Goddess Lakshmi also holds a lotus flower or is standing on a lotus. 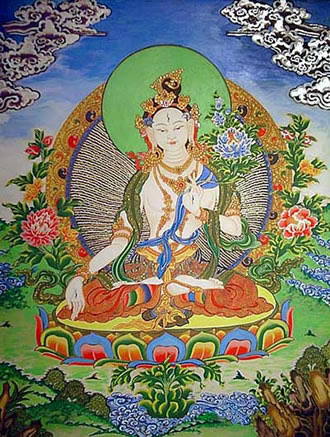 So, what are your Three Jewels?  Your three essential principles of faith?  Your three core values?
Posted by Michael P. Garofalo at 5:00 AM