"The Tao masters of antiquity
Subtle wonders through mystery
Depths that cannot be discerned
Because one cannot discern them
Therefore one is forced to describe the appearance
Hesitant, like crossing a wintry river
Cautious, like fearing four neighbors
Solemn, like a guest
Loose, like ice about to melt
Genuine, like plain wood
Open, like a valley
Opaque, like muddy water
Who can be muddled yet desist
In stillness gradually become clear?
Who can be serene yet persist
In motion gradually come alive?
One who holds this Tao does not wish to be overfilled
Because one is not overfilled
Therefore one can preserve and not create anew."
Translated by Derek Lin, 2006, Chapter 14, Tao Te Ching

"The concept of emulation is central to the Tao.  The ancient masters recognized that they did not understand the Tao completely but that they could learn from it by emulating nature.  We can learn from them in the same way.  The ancient masters were not given to frivolous or reckless acts.  They handled responsibilities with serious regard; they resolved issues by carefully considering all sides, without jumping to conclusions.  The masters were careful, but not uptight.  They went about their activities with a certain looseness, which took nothing away from their concern for others and for doing a good job.  They could be relaxed without being lax, and thus achieve excellence effortlessly; they could be unattached without being uncaring, and thus focus on the process instead of the result.  "Plain wood" is a reference to simplicity.  By keeping everything simple, the ancient masters experienced the profound happiness of the uncomplicated present.  The ancient sages were known for their openness.  They gladly considered new ideas without dismissing anything out of hand.  They treated everyone, even difficult people, with infinite patience.  Being opaque means these masters never put themselves on display, despite their spiritual refinements.  They had no interest in showing off their brilliance.  The image of muddy water becoming clear refers to the gradual revelation of a master's inner qualities.  The masters had tremendous depth, so it would take time for people to really know them.  The serenity of a sage can be mistaken for passivity or apathy.  It may be difficult for people to understand how anyone can embody tranquility and dynamism simultaneously.  The ancient masters were therefore never full of themselves.  Like them, we can cultivate quietly, preserving a sense of calmness without drawing attention to ourselves or creating a disturbance."


Tao Te Ching: Annotated and Explained.  Translation and Annotation by Derek Lin.  Foreword by Lama Surya Das.  "An inspiring, precise translation of the ancient Chinese wisdom classic─ with facing-page commentary that brings the text to life for you."  Woodstock, Vermont, 2006.  167 pages. 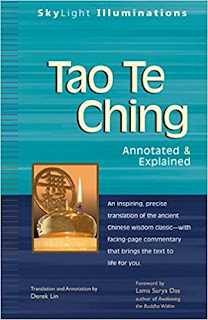 Other Translations, Interpretations or Interpolations of Chapter 15:


"The skillful masters of the Dao in old times, with a subtle and exquisite penetration, Comprehended its mysteries, and were deep also so as to elude men's knowledge.
As they were thus beyond men's knowledge,
I will make an effort to describe of what sort they appeared to be.
Shrinking looked they like those who wade through a stream in winter;
Irresolute like those who are afraid of all around them;
Grave like a guest in awe of his host;
Evanescent like ice that is melting away;
Unpretentious like wood that has not been fashioned into anything;
Vacant like a valley, and dull like muddy water.
Who can make the muddy water clear?
Let it be still, and it will gradually become clear.
Who can secure the condition of rest?
Let movement go on, and the condition of rest will gradually arise.
They who preserve this method of the Dao do not wish to be full of themselves.
It is through their not being full of themselves that they can afford to seem worn and not appear new and complete."
-  Translated by James Legge, 1891, Chapter 15


"The Sages of old were profound
and knew the ways of subtlety and discernment.
Their wisdom is beyond our comprehension.
Because their knowledge was so far superior
I can only give a poor description.
They were careful
as someone crossing a frozen stream in winter.
Alert as if surrounded on all sides by the enemy.
Courteous as a guest.
Fluid as melting ice.
Whole as an uncarved block of wood.
Receptive as a valley.
Turbid as muddied water.
Who can be still
until their mud settles
and the water is cleared by itself?
Can you remain tranquil until right action occurs by itself?
The Master doesn't seek fulfillment.
For only those who are not full are able to be used
which brings the feeling of completeness."
-  Translated by John H. McDonald, 1996, Chapter 15


"Of old, those who were leaders in good actions examined mysteries with deep penetration; searching deeply, they did not understand; even Masters did not understand; therefore their actions were void of strength.
They were timid, as those who cross a torrent in winter; irresolute, as those who fear their neighbors; grave, as strangers before their host; they effaced themselves as ice that melts; they were rough as undressed wood, empty as a valley, confused as troubled water.
Who is able by quietness to make pure the troubled heart?
Who is able by repose to become conscious of Inner Life?
He who safely maintains his consciousness of Life will find it to be inexhaustible.
Therefore he will be able, though not faultless, to renew perfectness."
-  Translated by Isabella Mears, 1916, Chapter 15


"Profound indeed were the most excellent among the ancients, penetrating, fathomless;
inasmuch as they were fathomless it becomes necessary to employ far fetched symbols when speaking of them.
Irresolute? as if fording a stream in winter.
Timid? as though fearful of their neighbors.
Grave? as if they were guests.
Elusive? like ice about to melt.
Simple? like raw material.
Expansive? like the space between hills.
Turbid? like muddy water.
Who can still the turbid and make it gradually clear;
or quiet the active so that by degrees it shall become productive?
Only he who keeps this Tao, without desiring fullness.
If one is not full it is possible to be antiquated and not newly fashioned."
-  Translated by C. Supurgeon Medhurst, 1905, Chapter 15

"The Tao of those eminent for wisdom in the olden times was subtle, mysterious, recondite, and penetrating.
Its depths were unrecognizable by others.
The non-adepts, being unable to learn it, strove by main force, therefore, to act it out in practice.
They endured the hardships of their search as those who ford streams in the winter.
Cautious were they, as those who dread the ridicule of their neighbors.
Reverent were they, as those who entertain a visitor.
Expansive were they, as ice on the point of melting.
Simple and unpolished were they, as unhewn wood.
Vacant were they, as a ravine.
Undiscerning were they, as turbid water.
Who is able to make turbid water grow gradually clear by reducing it to quiescence?
Who is able to impart unending life to that which is at rest by setting it in perpetual motion?
Those who preserve this Tao desire no fullness; wherefore, having no fullness,
they are able to guard it in their hearts for ever and it never requires to be renewed."
-  Translated by Frederic Henry Balfour, 1884, Chapter 15


"Those of yore who have succeeded in becoming masters are subtle, spiritual, profound, and penetrating.
On account of their profundity they cannot be understood.
Because they can not be understood, therefore I endeavor to make them intelligible.
How cautious they are!
Like men in winter crossing a river.
How reluctant! Like men fearing in the four quarters their neighbors.
How reserved! They behave like guests.
How elusive! They resemble ice when melting.
How simple! They resemble rough wood.
How empty! They resemble the valley.
How obscure! They resemble troubled waters.
Who by quieting can gradually render muddy waters clear?
Who by stirring can gradually quicken the still?
He who cherishes this Reason is not anxious to be filled.
Since he is not filled, therefore he may grow old;
Without renewal he is complete."
-  Translated by D. T. Suzuki and Paul Carus, 1913, Chapter 15 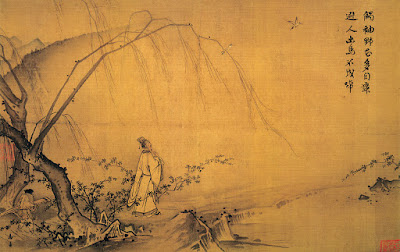 Posted by Michael P. Garofalo at 2:00 AM