"Who knows his manhood's strength,
Yet still his female feebleness maintains;
As to one channel flow the many drains,
All come to him, yea, all beneath the sky.
Thus he the constant excellence retains;
The simple child again, free from all stains.

Who knows how white attracts,
Yet always keeps himself within black's shade,
The pattern of humility displayed,
Displayed in view of all beneath the sky;
He in the unchanging excellence arrayed,
Endless return to man's first state has made.

Who knows how glory shines,
Yet loves disgrace, nor e'er for it is pale;
Behold his presence in a spacious vale,
To which men come from all beneath the sky.
The unchanging excellence completes its tale;
The simple infant man in him we hail.

The unwrought material, when divided and distributed, forms vessels.
The sage, when employed, becomes the Head of all the Officers of government.
In his greatest regulations he employs no violent measures."
-  Translated by James Legge, 1891, Chapter 28

"He who is aware of the Male
But keeps to the Female
Becomes the ravine of the world.
Being the ravine of the world,
He has the original character (teh) which is not cut up.
And returns again to the (innocence of the) babe.
He who is conscious of the white (bright)
But keeps to the black (dark)
Becomes the model for the world.
Being the model for the world,
He has the eternal power which never errs,
And returns again to the Primordial Nothingness.
He who is familiar with honor and glory
But keeps to obscurity
Becomes the valley of the world.
Being the valley of the world,
He has an eternal power which always suffices,
And returns again to the natural integrity of uncarved wood.
Break up this uncarved wood
And it is shaped into vessel
In the hands of the Sage
They become the officials and magistrates.
Therefore the great ruler does not cut up."
-  Translated by Lin Yutang, 1948, Chapter 28


"The Nature of Opposites and Change ...
Be aware of your masculine nature;
But by keeping the feminine way,
You shall be to the world like a canyon,
Where the Virtue eternal abides,
And go back to become as a child.
Be aware of the white all around you;
But remembering the black that is there,
You shall be to the world like a tester,
Whom the Virtue eternal, unerring,
Redirects to the infinite past.
Be aware of your glory and honor;
But in never relinquishing shame,
You shall be to the world like a valley,
Where Virtue eternal, sufficient,
Sends you back to the Virginal Block.
When the Virginal Block is asunder,
And is made into several tools,
To the ends of the Wise Man directed,
They become then his chief officers:
For "The Master himself does not carve."
-  Translated by Raymond Blackney, 1955, Chapter 28


Chapter 28 of the Tao Te Ching

Chapter and Thematic Index (Concordance) to the Tao Te Ching 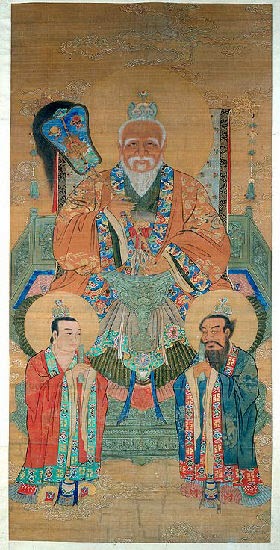 Posted by Michael P. Garofalo at 2:39 AM