"Reach the pole of emptiness (hsü-chi),
Abide in genuine quietude (ching).
Ten thousand beings flourish together,
I am to contemplate (kuan) their return (fu).
Now things grow profusely,
Each again returns (kuei) to its root.
To return to the root is to attain quietude (ching),
It is called to recover life (ming).
To recover life is to attain the Everlasting (ch'ang),
To know the Everlasting (ch'ang) is to be illumined (ming).
Not knowing (chih) the Everlasting (ch'ang),
One commits evils wantonly.
Knowing the Everlasting one becomes all containing (yung).
To be all containing is to be public (kung).
To be public is to be kingly (wang).
To be kingly is to be like heaven.
To be like heaven is to be like Tao.
To be like Tao is to last long.
This is to lose the body without becoming exhausted (pu tai)."
-  Translated by Ellen M. Chen, 1989, Chapter 16


In Praise of Nothing: An Exploration of Daoist Fundamental Ontology.  By Ellen M. Chen.  Xlibris, Corp., 2010.  250 pages.  ISBN: 978-1456826093.  VSCL.  "Ellen M. Chen received her Ph.D. in philosophy from Fordham University.  She taught philosophy at St. John's University, retiring in 1996. This volume, In Praise of Nothing, will be followed by a volume on Daoist Cosmology: On the Harmony of Opposites."

Other translations, interpolations, and interpretations of Chapter 16:


"Attain to the goal of absolute vacuity;
Keep to the state of perfect peace.
All things come into existence,
And thence we see them return.
Look at the things that have been flourishing;
Each goes back to its origin.
Going back to the origin is called peace;
It means reversion to destiny.
Reversion to destiny is called eternity.
He who knows eternity is called enlightened.
He who does not know eternity is rushing blindly into miseries.
Knowing eternity he is all-embracing.
Being all-embracing he can attain magnanimity.
Being magnanimous he can attain omnipresence.
Being omnipresent he can attain supremacy.
Being supreme he can attain Tao.
He who attains Tao is everlasting.
Though his body may decay he never perishes."
-  Translated by Ch'u Ta-Kao, 1904, Chapter 16


"Be utterly humble
And you shall hold to the foundation of peace.
Be at one with all these living things which, having arisen and flourished,
Return to the quiet whence they came,
Like a healthy growth of vegetation
Falling back upon the root.
Acceptance of this return to the root has been called 'quietism,'
Acceptance of quietism has been condemned as 'fatalism.'
But fatalism is acceptance of destiny
And to accept destiny is to face life with open eyes,
Whereas not to accept destiny is to face death blindfold.
He who is open-eyed is open-minded-
He who is open-minded is open-hearted,
He who is open-hearted is kingly,
He who is kingly is godly,
He who is godly is useful,
He who is useful is infinite,
He who is infinite is immune,
He who is immune is immortal."
-  Translated by Witter Bynner, 1944, Chapter 16


"Empty the self completely; Embrace perfect peace.
Realize that all beings alike go through their processes of activity and life,
and then they return to the original source.
Returning to the source brings peacefulness and stillness.
This stillness is the flow of nature, and signifies that the beings have lived their allotted span of life.
Accepting this brings enlightenment and tranquility,
ignoring this brings confusion and sorrow
If one can accept this flow of nature; one can cherish all things.
Being all-cherishing you become impartial;
Being impartial you become magnanimous;
Being magnanimous you become natural;
Being natural you become one with The Way;
Being one with The Way you become immortal:
Though the body will decay, the Way will not."
-  Translated by John Discus, 2002, Chapter 16


"To arrive at ultimate quietness
Steadfastly maintain repose.
All creatures together have form;
I see them return again to their root.
The Master creatures come to perfect form,
Continuously they return to their root.
Continuous return to the root is called repose,
Repose is called the law of return,
The law of return is called eternity.
To know eternity is called illumination.
To ignore eternity is to draw misfortune on oneself,
To know eternity is to be great of Soul,
To be great of soul is to be a ruler,
To be a ruler is to be greater than all,
To be greater than all is to be conscious of Life,
To be conscious of Life is to endure.
The body shall disappear but not decay."
-  Translated by Isabella Mears, 1916, Chapter 16 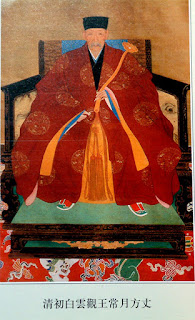 Posted by Michael P. Garofalo at 6:00 AM