"The Way is eternally nameless,
Though simplicity is small, the world cannot subordinate it.
If lords and monarchs can keep to it, all beings will naturally resort to them.
Heaven and earth combine, thus showering sweet dew.
No humans command it; it is even by nature.
The Way is to the world as rivers and oceans to valley streams."
-  Translated by Thomas Cleary, 1991, Chapter 32


"The Tao of the Absolute has no name.
Although infinitesimal in its Simplicity,
The world cannot master it.
If leaders would hold on to it,
All Things would naturally follow.
Heaven and Earth would unite to rain Sweet Dew,
And people would naturally cooperate without commands.
Names emerge when institutions begin.
When names emerge, know likewise to stop.
To know when to stop is to be free of danger.
The presence of the Tao in the world
Is like the valley stream joining the rivers and seas."
-  Translated by R. L. Wing, 1986, Chapter 32


"The Way eternal has no name.
A block of wood untooled, though small,
May still excel in the world.
And if the king and nobles could
Retain its potency for good,
Then everything would freely give
Allegiance to their rule.
The earth and sky would then conspire
To bring the sweet dew down;
And evenly it would be given
To folk without constraining power.
Creatures came to be with order's birth,
And once they had appeared,
Came also knowledge of repose,
And with that was security.
In this world,
Compare those of the Way
To torrents that flow
Into river and sea."
-   Translated by Raymond B. Blakney, 1955, Chapter 32


"The Tao remains eternally unnamable.
As undivided simplicity,
If it resides in an ordinary person,
nobody in the world can subjugate him;
If an influential person abides by it,
everybody in the world will be drawn to him.
When heaven and earth come together in harmony,
Showering the world equally with the sweet rain of undivided simplicity,
People cooperate voluntarily without any governing rules.
When simplicity is divided, names come into existence.
When names are already there, the process of further division should stop,
For to know when to stop
is to avoid the danger of complexity.
The Tao is to the world
what the ocean is to the rivers of the earth."
-  Translated by Yasuhiko Genku Kimura, Chapter 32


"Tao, the Eternally Nameless.
Though primordial simplicity is infinitesimal, none dare make it a public servant.
Were princes and monarchs able to maintain it, all creation would spontaneously submit.
Heaven and earth harmonized, there would be an abundance of nourishing agencies; the people unbidden, would cooperate of their own accord.
Names arose when differentiation commenced; once there were names it became important to know where to stop.
This being known, danger ceased.
The Tao spread throughout the world, may be compared to mountain rivulets and streams flowing toward the sea."
-  Translated by C. Spurgeon Medhurst, 1905, Chapter 32


"The eternal Tao is nameless; though it be
Too insignificant a name to have,
In its primordial simplicity
The whole world dare not make of it a slave.
If prince or king could keep it, everything
Would homage pay to him spontaneously,
And Heaven and Earth, combined, sweet dews would bring,
And people know no rule but harmony.
But when it takes control, it has a name,
And, knowing when to stop, men rest at ease,
For to the Tao the whole world is the same
s river streams compared with mighty seas."
-  Translated by Isaac Winter Heysinger, 1903, Chapter 32

"Tao is forever of no name.
Small as it may be,
Tao as the uncarved block cannot be used by anyone in the universe.
If kings and lords could follow it well,
Ten Thousand Things will spontaneously obey them.
Heaven and earth would make love to each other,
Sweet dew will thereby fall gently.
With no decrees, people will be naturally ruled.
When the whole uncarved block is divided,
The pieces become instruments and in need of their names.
When there are already many names,
It is also necessary to know their limitations.
When their limitations are known,
There are no things in danger.
Tao is manifest in the universe,
Like the water flows from the rivers and the valleys into Yan Ze River and ocean."
-  Translated by Eichi Shimomisse, 1998, Chapter 32


"Tao has always been nameless;
an Uncarved Block, simple and small, but subject to none under Heaven.
All things will obey the Monarch who defends it.
Heaven uniting with Earth, as sweet dew falling.
People not commanded, but true to themselves.
First there were names, then more names.
It is time to stop.
Knowing when to stop avoids exhaustion.
Tao flows from Heaven, as Rivers flow into the Sea."
-  Translated by Karl Kromal, 2002, Chapter 32


"The Tao is nameless and unchanging.
Although it appears insignificant,
nothing in the world can contain it.
If a ruler abides by its principles,
then her people will willingly follow.
Heaven would then reign on earth,
like sweet rain falling on paradise.
People would have no need for laws,
because the law would be written on their hearts.
Naming is a necessity for order,
but naming can not order all things.
Naming often makes things impersonal,
so we should know when naming should end.
Knowing when to stop naming,
you can avoid the pitfall it brings.
All things end in the Tao
just as the small streams and the largest rivers
flow through valleys to the sea."
-  Translated by John H. McDonald, 1996, Chapter 32 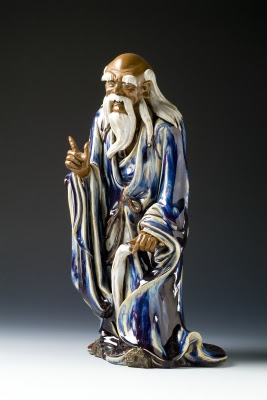